New York, NY, December 22, 2020 — A new global Ipsos survey for the World Economic Forum finds about half of working adults saying they have experienced increased anxiety around job security (56%), stress due to changes in work routines and organization (55%) or to family pressures such as childcare (45%), or difficulty finding a work-life balance (50%), as a result of the COVID-19 pandemic.

The online survey conducted between November 20 and December 4 among nearly 13,000 employed men and women across 28 countries points to widespread disruption in the lives of workers. At one time or another since the outbreak of the pandemic, 52% of those surveyed worked from home, 32% worked longer hours, 32% worked fewer hours, 30% took a leave of absence and 15% left their job.

Many workers around the world experienced both an increase in the number of hours they worked at times and a reduction at other times, highlighting the extent to which they had to adapt in different ways according to the cycles of the pandemic and the local policies in their country.

Just under half of all workers globally report reduced productivity (46%) and working at unconventional hours, such as very early in the morning or late at night (44%).

Nearly half of those who worked from home say they have felt lonely or isolated when they did (49%) or had difficulty getting work done there due to inadequate home office setup or equipment (46%).

Those under the age of 35, business owners, decision makers, lower-income workers, women, and those with a college education are especially prone to reporting negative effects on their well-being from pandemic-related changes in their work life.

Work-related changes since the outbreak of the pandemic

At one time or another since the outbreak of the pandemic:

Globally, around two-thirds of business owners, decision makers, and those with a college degree report having worked from home, compared to about one-third of those with no college education.

In addition to business owners, decision makers, and the better educated, two groups stand out for having experienced a great deal of disruption since the outbreak of the COVID-19 pandemic: lowincome workers and those under the age of 35, especially when it comes to seeing reduced work hours and leaving their job.

Each of the following is reported to have been experienced by about half of working adults globally as a result of the COVID-19 pandemic:

• Stress due to changes in work routines and organization, by 55% — from 72% in Peru and Saudi Arabia to just 26% in the Netherlands;

• Stress due to family pressures such as childcare, by 45% from 64% in South Africa and Saudi Arabia to just 18% in the Netherlands; and

And these were experienced by about nearly half of those who worked from home:

▪ Difficulty getting work done at home due to inadequate home office setup or equipment, also by 46% of those who worked from home — from 67% in Turkey to just 23% in the Netherlands.

Those under the age of 35, business owners, decision makers, lower-income workers, women, and those with a college education are especially prone to reporting negative effects on their well-being from pandemic-related changes in their work life.

Ipsos interviewed a total of 12,823 employed adults aged 18-74 in United States, Canada, Malaysia, South Africa, and Turkey, and 16-74 in 23 other countries between November 20 and December 4, 2020. The sample consists of employed individuals. The sample size ranges from n=249 in Sweden to n=801 in China with an average of 458 per country.

The samples in Argentina, Australia, Belgium, Canada, France, Germany, Great Britain, Hungary, Italy, Japan, the Netherlands, Poland, South Korea, Spain, Sweden, and the U.S. can be taken as representative of those who are employed within the general adult population. The samples in Brazil, Chile, China (mainland), Colombia India, Malaysia, Mexico, Peru, Russia, Saudi Arabia, South Africa and Turkey are more urban, more educated, and/or more affluent than the national population of employed adults. The survey results for these countries should be viewed as reflecting the views of the more “connected” segment of their employed population.

Weighting has been employed to balance demographics and ensure that the composition of each country’s sample reflects that the adult population according to the most recent census data.

Where results do not sum to 100 or the ‘difference’ appears to be +/-1 more/less than the actual, this may be due to rounding, multiple responses or the exclusion of don’t knows or not stated responses. The publication of these findings abides by local rules and regulations.

Ipsos is the world’s third largest market research company, present in 90 markets and employing more than 18,000 people. Founded in France in 1975, Ipsos is listed on the Euronext Paris since July 1st, 1999. The company is part of the SBF 120 and the Mid-60 index and is eligible for the Deferred Settlement Service (SRD). ISIN code FR0000073298, Reuters ISOS.PA, Bloomberg IPS:FP www.ipsos.com

Prof. Stavroula Leka, Director of the Center for Organizational Health and Development, Chair of the International Commission on Occupational Health...

"Mental health is a system-forming factor for many related areas, primarily the social spectrum. Our goal is a healthy society,... 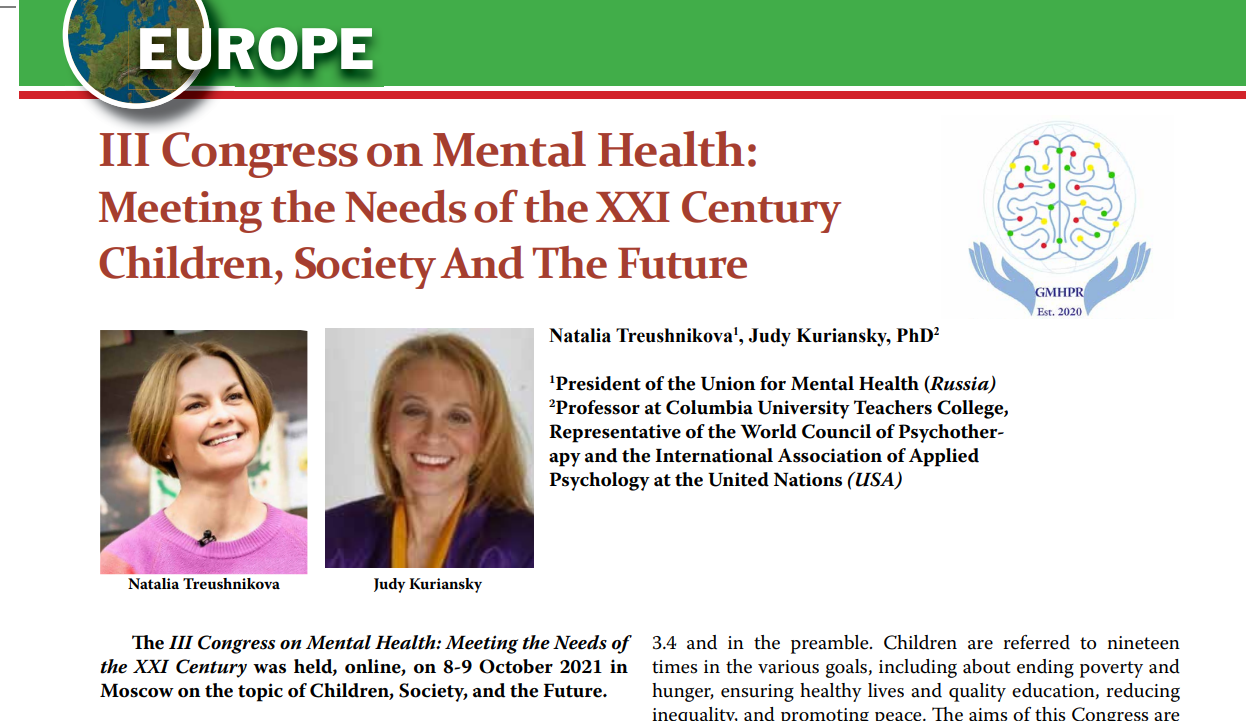 The proceedings of the III Congress on Mental Health: Meeting the Needs of the XXI Century "CHILDREN, SOCIETY AND THE FUTURE" by...

AKNIN Nicole, President of the European Confederation of Psychoanalytical Psychotherapy (ECPP - French Branch), Delegate of the WCP at the...

PalaceThe European psychological Congress gathers for the sixteenth time. It is the first time when it gathers in Moscow. The... 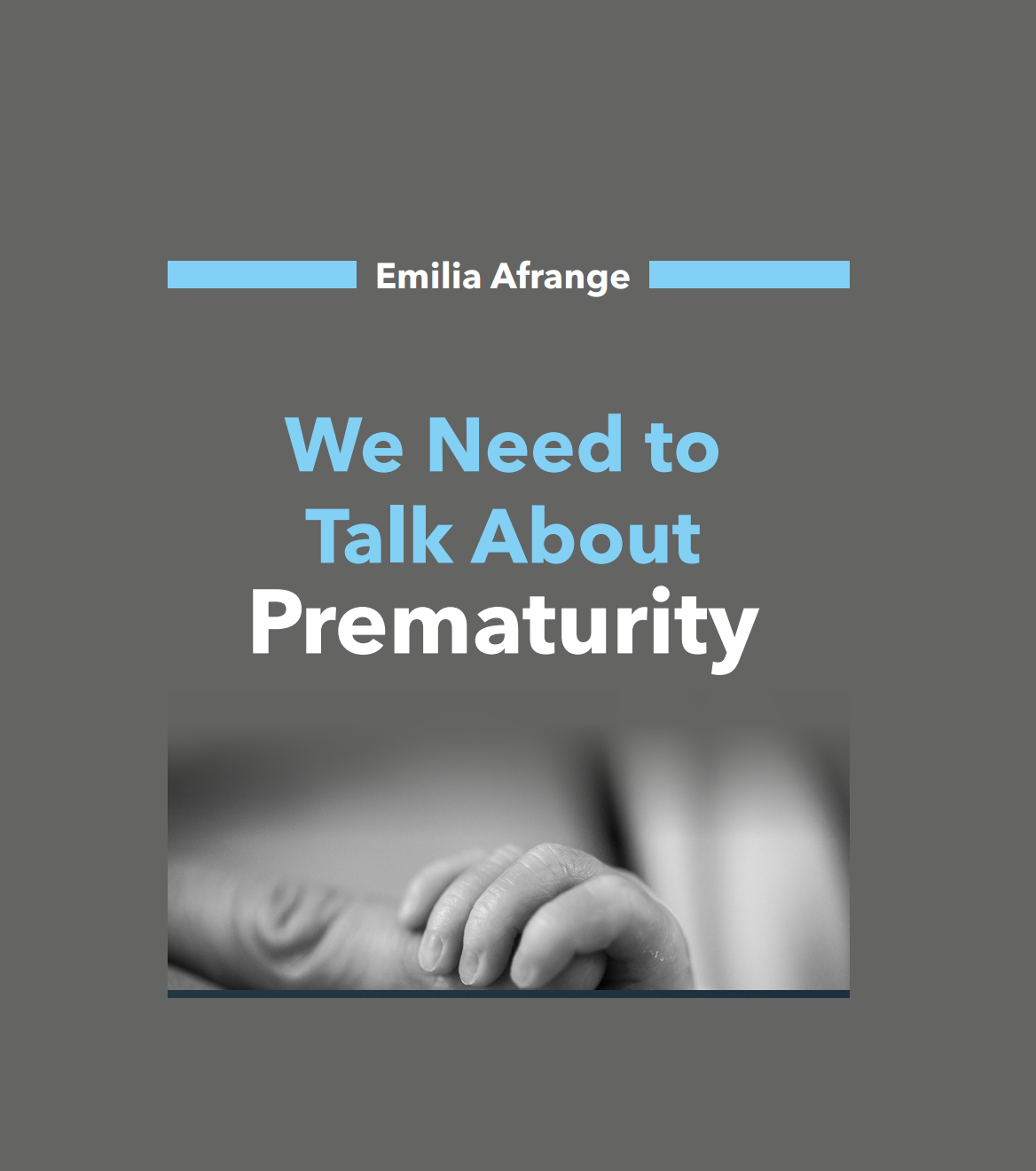 We Need to Talk About Prematurity

New book by Emilia Afrange was published in English and Portuguese The book “We Need to Talk About Prematurity” is...

Mental Health of Children and Adolescents will be Discussed at the II Congress on Mental Health: Meeting the Needs of the XXI Century»

Mental health of children and adolescents is a crucial indicator of the wellbeing of the state, the nation’s spiritual and...