Nikita S. Mikhalkov, President of the Russian Cultural Fund, Chairman of the Union of Cinematographers of Russia, has joined the Organizing Committee of the I World Congress

Nikita S. Mikhalkov, the greatest Russian film director, screenwriter, actor, producer, President of the Russian Cultural Fund, Chairman of the Russian Society of Cinematographers’ Union, President of the Moscow International Film Festival, People’s Artist of RSFSR, Honorary Member of Russian Academy of Arts, well-known Russian film-maker, actor, script writer and producer, Laureate of State prizes (1993, 1995 and 1999), founder of the Russian Academy Golden Eagle Awards, has joined the Organizing Committee of the I World Congress on Mental Health: Meeting the Needs of the XXI Century.
Mr. Mikhalkov is a presenter of the Russian Federation at the European Film Academy. He is a member of the World Commission on Culture and Development at UNESCO (since 1993). He is a holder of numerous international and national government and professional awards: People’s Artist of RSFSR, Lenin Komsomol Prize (1978), Order of Merit for the Fatherland I (2015), II (2005) – for outstanding contribution to the development of national culture and art, and many years of creative activities, III (1995) – for services to the state, a great contribution to the development of motion picture arts and culture, IV (2010) – for outstanding contribution to the development of the domestic art of film, many years of creative and social activities, the Order of Saint Luke and 1st Degree Order of St. Sergius of Radonezh, Commander of the Legion of Honour (the National Order of the Legion of Honour) and previously Officer, Knight Grand Cross of the Order of Merit of the Italian Republic (2004).

Mr. Mikhalkov has an impressively long list of wins at the most prestigious film festivals, like Cannes, Venice, Moscow or Karlovy Vary.

Dark Eyes (1987), incorporating several short stories by Chekhov, was highly praised, and Mastroianni received the Best Actor Prize at the 1987 Cannes Film Festival and an Academy Award nomination for his performance. Mikhalkov’s next film, Urga (1992, a.k.a. Close to Eden), set in the little-known world of the Mongols, received the Golden Lion at the Venice Film Festival and was nominated for the Academy Award for Best Foreign Language Film. Mr. Mikhalkov’s “Burnt by the Sun (1994), received the Grand Prize at Cannes and the Academy Award for Best Foreign Language Film, among many other honours. In 1996, he was the head of the jury at the 46th Berlin International Film Festival.

In 2007, Nikita Mikhalkov directed and starred in 12, a Russian adaptation of Sidney Lumet’s court drama 12 Angry Men. In September 2007, 12 received a special Golden Lion for the «consistent brilliance» of its work and was praised by many critics at the Venice Film Festival. In 2008, 12 was named as a nominee for Best Foreign Language Film for the 80th Academy Awards. The epic drama «Burnt by the Sun 2» was selected in 2011 as the Russian entry for the Best Foreign Language Film at the 84th Academy Awards.

Please visit the I World Congress’s website to access online registration for the congress program, including detailed information and registration options: www.mental-health-congress.ru/en/

The first webinar on music therapy was held in St. Petersburg

The first in St. Petersburg webinar on music therapy with international participation "Music therapy in the work of a...

By Prof Roy Abraham Kallivayalil President, World Association of Social Psychiatry  This is to welcome you to the 23rd World Congress of...

According to the World Health Organization data set out as part of the 2017-2025 Global action plan of the Public... 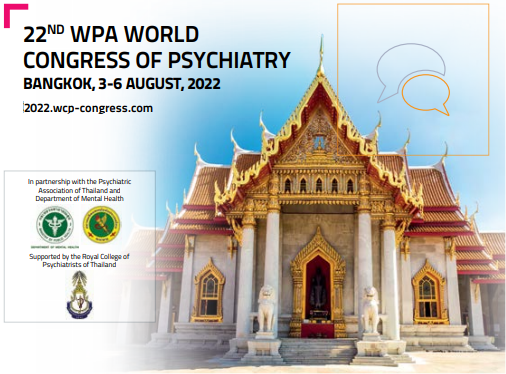 "Art Therapy and Outsider Art" at the WPA World Congress

The special session "Art Therapy and Outsider Art" was held on the initiative of the Russian NGO "Outsiderville" (St. Petersburg)...

Source: www.triestementalhealth.org The international school and conference "The right [and the opportunity] to have a [whole] life" organized by the...